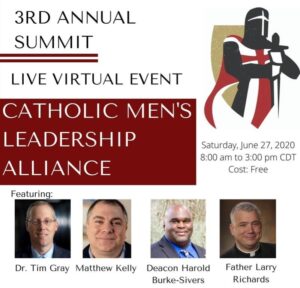 You are invited to participate in the 2020 Catholic Men’s Leadership Alliance Virtual Summit featuring Dr. Tim Gray, Fr. Larry Richards, Matthew Kelly, Fr. Rick Heilman and Deacon Harold Burke-Sivers.  The Virtual Summit will be streamed for free on June 27th from 8:00am-3:00pm (CST).  This year’s theme is Knowing and Living the Post Covid-19 New Normal.  CMLA’s Virtual Summit will be a powerful day for reflection and action.

The format for the CMLA Virtual Summit is ideal for group and individual participation.  We will begin with Mass, celebrated by Archbishop Gregory Aymond of New Orleans, and then dive deeply into relevant, thought-provoking conversations such as Being the Church of the Future Today, and The Stakes are Higher and Opportunities Greater.  The CMLA Virtual Summit will feature engaging presentations from leaders across the US, round table discussions between clergy and lay leaders, small group discussion, and session summaries.  Afternoon sessions include Building and Nurturing the New Catholic Family, and Together in Battle: Spiritual Battle Workshop.  We will close out the summit by sharing relevant resources, followed by a call to action from Deacon Harold Burke-Sivers.

We anticipate many individuals and communities of men will participate in the 2020 CMLA Virtual Summit.  We hope that we can count you among them. Click here to register. 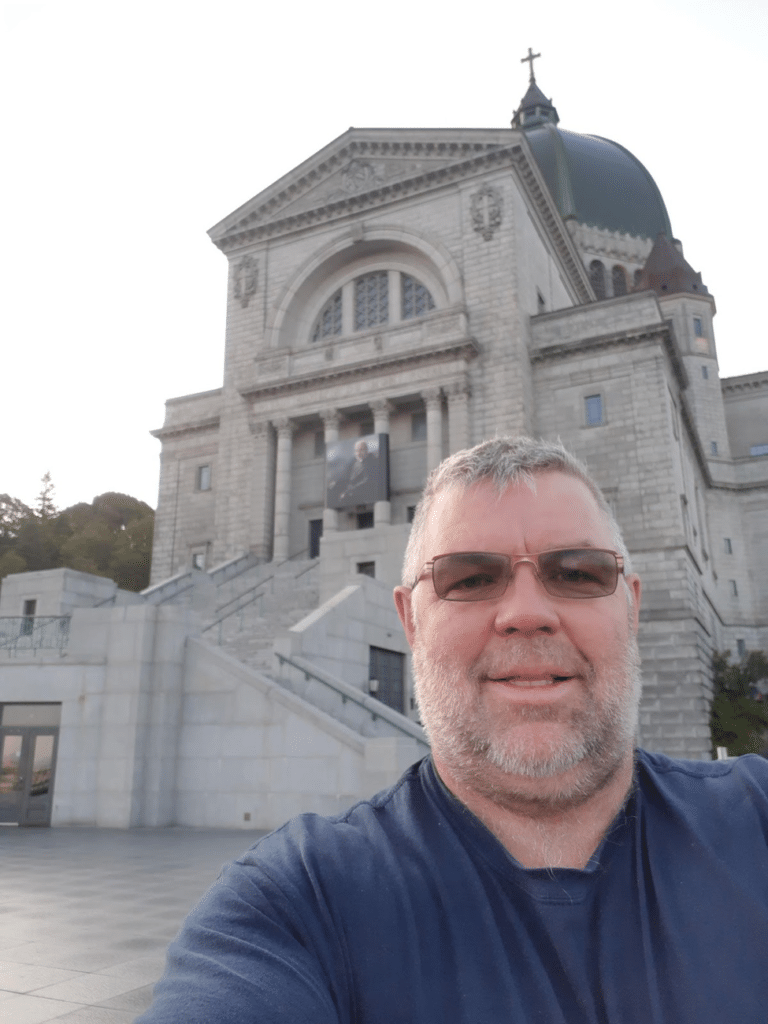 “It was revealed to them that they were serving not themselves but you, in the things which have now been announced to you by those who preached the good news to you through the Holy Spirit sent from heaven, things into which angels long to look.” 1 Peter 1:12

I am late with my Christmas message so I will focus on celebrating the new year. 2019 was a very busy year for God Squad. We had an awesome conference and made a new friend, Bishop Scott McCaig, the Canadian Military Ordinariate. The barbecue season was extremely busy, going almost every weekend in May and June, and then again in September and October.  We were able to support several Stampede breakfasts and Fr Troy’s first Mass BBQ. We undertook a new challenge by organizing and painting St. Henry’s church in Southern Alberta. This was very much appreciated by the community and Bishop McGrattan. Our evangelization motorcycle tour took us all the way to Montreal and Ottawa and back. We were able to visit St Joseph’s oratory (our patron saint) then visited the Canadian Martyrs shrine (Jeff thinks they are the North American Martyrs), which was extremely moving for all. it was great to be there as Jeff Cavins experienced it for the first time and appeared to be very moved and to hear Bishop Scott preach the martyrdom of St John De Brebeuf.

A rest was needed which led to the reason why a Christmas newsletter wasn’t sent out.  A brand new year brings new hope and optimism. We are excited to host our 23rd annual conference coming up March 20th & 21st. For the Saskatchewan fans out there we have keynote speaker, John Chick, CFL defensive superstar. We are also blessed to have Jane Adolphe, law professor from Ave Maria University and international law expert for the Vatican where she has worked for the last 8 years. I would imagine the barbecue season will be busy once again as the requests are already starting to come in. This past weekend we did a charity gala, roasting a whole pig in -27 degree weather. We are excited to promote a new book by Fr Donald Calloway called Consecration to St Joseph. Our host parish, St. Peters, will be running the 33-day consecration prayers culminating on March 19th.  These books will be available on our website leading up to the conference if you would like to obtain a copy for yourself.

The God Squad would like to wish you and your family all the blessings in the new year and that you follow God’s will as you tackle everyday living, Faithfully, fruitfully and loving your family and your community.