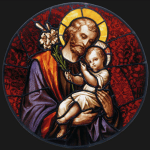 It was through the God Squad many years ago that I was first introduced to a novena to St. Joseph. Since then I have prayed it many times asking for his intersession for many prayer intentions. I’ve also joined in the novena preceding the conference for the last ten- fifteen years. This past spring we were trying to sell our rental house and we heard that you should bury a statue of St. Joseph on the property and then the house would sell. We felt like maybe that was too superstitious, so we decided to should pray a novena to St. Joseph asking his intersession and protection over the sale of this house. Over the past 2 years we had the house listed privately and had many close deals, but they always fell through. Now we had listed it with a relator. It was the last week of June that we had started the novena and by day 8 we had received an offer on the house. Very interesting, God is so good! We had decided then that we would just keep praying the novena until the sale was closed. We were very excited. Our sister in-law shared that her parents had been trying to sell their farm for over two years without luck. We told her that we would add them to the novena. A week later they had their first legitimate offer and it went through! With a few minor bumps in the road, our own deal finalized at the end of August. Another special intention popped up, so we decided to keep going! We continued the novena in thanksgiving for everything God had done so far and to pray for the new intentions. This is a case where it has gone far beyond the usual 9 days! I just wanted to share the power of prayer with a novena prayer to St. Joseph.

As I was reflecting about this year’s God Squad Men’s Conference, I was thinking about how the conference has affected my life over the last 15 years. For one, it’s always a great renewal for me during Lent. It has helped me grow in my faith in so many ways. I started attending as one of the “young guys” and now I have an 11 year old son asking when he can start coming to the conference! Men come to this conference from all age groups and I always look forward to seeing the friends I have made over the years. I think I look forward to the fellowship with these guys as much as the talks. I am excited about this year’s topic “Create in me a clean Heart.” I think it is important for us as Catholic Men to continue to give our hearts to God, so that he can make them clean. Confession is always one of the highlights of my faith, but it gives me particular joy to see men lining up for hours to go to Reconciliation at the conference.