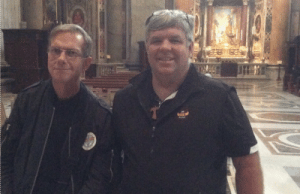 Michele and I have been on the pilgrimage of a life time. We went to to the Holy land with Jeff Cavins and his wife, Emily. There were 180 pilgrims, 23 from Canada. We visited so many of the holy

sites, that it may take months to comprehend it all. We decided to add Rome to our itinerary on our way home.

Many of you know that I have a great devotion to St Joseph and have relied heavily on his intersession over the years. I just did another novena before Christmas asking him for assistance in finding a speaker for the 2015 God Squad conference and completing our house renovations. He has never failed to help my family including making the pilgrimage a reality.

During our time in the Holy Land I saw a simple church dedicated to St. Joseph next to the Church of The Annunciation, which was massive. St Joseph’s humble workshop is housed in the basement of the little church. I inquired of our guides if there was a spot that is St Joseph’s resting place. There was not.

Then in Rome we toured the excavation under the Vatican to see St Peter’s bones which are located under the High Alter at St Peter’s Basilica. This led us into the Vatican Grotto where many of the popes are laid to rest. We then proceeded into St Peter’s Basilica where we were able to pray at the tombs of St Pope John Paul II and St Pope John XXIII. It was a little later in our visit that I located the side alter dedicated to St Joseph.

That was where the pilgrimage, and all I had done and seen, hit me hard. I had been on this trip due to St. Joseph’s intercession and there was very little recognition of him anywhere. He was so humble that his final resting place is not even recognized. I asked myself how this could happen? I struggle to imagine how it was that he didn’t brag about his boy – “Did you see how Jesus blew away the Rabbis in the Temple when he was 14?”

This was not him though. There is very little recognition of him and his role as the foster father of Jesus and the head of the holy family on earth, in the churches we visited. I found out that of the 66 basilicas in Rome one bears his name but it was only started in 1912. Pope Pius IX declared him Patron of the universal church. He wasn’t even included in the mass for the first 1900 years. Pope John XXIII added him to the canon of the mass and Pope Francis just added him to 3 of the eucharistic prayers.

Canadians are so privileged to have St Joseph as our Patron Saint (which could be why we are so polite). We have 2 basilicas dedicated to St Joseph, including St Joseph’s Oratory, which is the 3rd largest dome in the world. He is finally being recognized after 1900 years of sitting in the shadows.

I pray that I can begin to follow St Joseph closer, walking in humility. 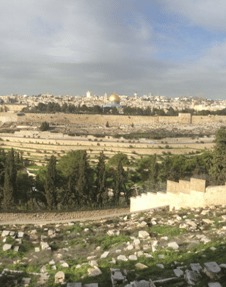 Looking from the Mt of Olives