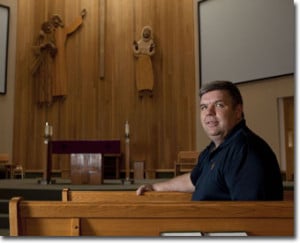 Constable Sean Lynn is a police officer for the city of Calgary. He has worked as an officer for over 20 years and is currently working with youth at risk of falling into gang life. He is a husband and father of 8 children (who are home schooled) and has been married for 25 years. Sean is the president of ‘God Squad Canada’ an organization that puts on an annual men’s conference to promote men to be the husbands and fathers that God has called them to be. Sean has appeared with Steve Wood and Jeff Cavins on EWTN to spread the message for Catholic husbands, fathers, and families.  Sean has also conducted a number of radio interviews on EWTN.

Sean’s faith journey stared when he married Michele in 1984; having to raise a family brought up lots of questions.  After their 3rd child; Sean and Michele were both separately challenged with issues on their faith and started to search for answers.  A little while after that they did the search together and rediscovered their faith.  Today they have 8 children, two whom are married, another who is attending Ave Maria University taking philosophy and theology.  Sean has been to many schools and churches spreading the message of Christ for the family life in today’s society.