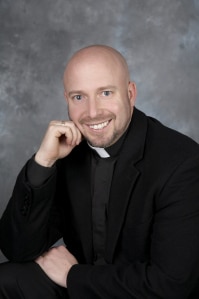 Born in Hull, Québec in 1974, Jerome moved west with his family in 1982 – first to Calgary, Alberta, and a few years later to Canmore. It was there that the seeds of his love for nature – for hunting, fishing, and the outdoors – took root.  Social by nature, he also loved to go off alone – to sit on the berm overlooking the valley – to reflect on the meaning of life.

Jerome realized that he needed to take some time out to find peace and a deeper sense of purpose in his life.  He returned to his family home in Canmore where at his mother’s insistence, he agreed to attend Mass with his parents. Upon walking into Sacred Heart Church, he was filled with an overwhelming sense of peace – so much so that the following week, he went on his own.  As he was exiting the church, the priest said to him: “You and I, we have to talk – how about next week after Mass?” Seven days later, he asked Jerome, “So tell me, when did it start?”

The possibility of a vocation to the priesthood had never entered Jerome’s mind. Before Jerome was ready to do battle for the Lord, he first battled with the Lord.  Ten years would pass before Jerome walked down the aisle at St. Mary’s to make his own promises to God: promises of obedience, celibacy, and praying the Liturgy of the Hours.

Today, the first thing that you notice when you meet Fr. Jerome is that he is filled with energy, passion, and an irrepressible zest for life.  Friendly and outgoing, he has a wonderful sense of humour and puts everyone at ease wherever he goes. He has a profound understanding of human nature, as well as of faith and Scripture.  He digs deep – then even deeper – to discover what the Lord wants to reveal through him.

He goes over every homily before the presence of Our Lord in the Tabernacle, and when you listen to him speak, you always come away feeling challenged and inspired.  Fr. Jerome has a way of unpacking the mysteries of the spiritual life in a way that is as down to earth as it is unmistakably orthodox. 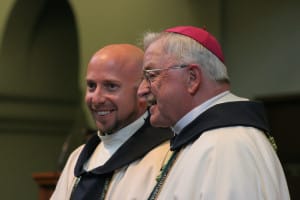